Tips for Standing Out in a Crowd at Events 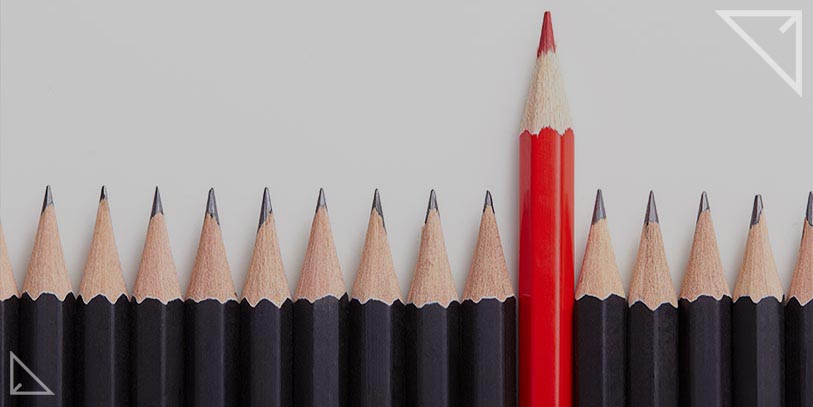 You paid for an event booth but what you do to sell at a huge event depends on you and your actions.

Stand out in the crowd and work your booth like these businesses did at the Winter Park Fall Art Festival: 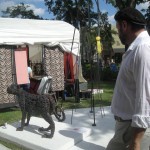 Put Yourself Out There & Stay There:
James L. Oleson
Sculptor James Oleson skipped the use of a booth and instead put his artwork out on its own white platform creating a contrasting image against the deep, dark brown and black steel sculptures. His creations are made out of found steel, reused, reshaped and formed into beautiful statues. He displayed a striking leopard, a grouping of long, tall, thin steel horses, a headless body. Each piece was forged and built into shapes that were stark and strong and accentuated on the clean layout he placed them on.
http://www.artandsculptures.com 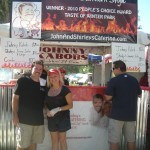 Before I walked up to visit John & Shirley, I could smell the food when I walked into the park:
Mouth-watering chicken and spices on the grill. And before I saw them, I heard them. They were inviting people nearby to come and try the Winter Park People’s Choice Winner’s Johnny Kabob’s Grilled Chicken.

They had samplers walking through the crowd providing free chicken samples. The grills were fired up and full and the Swamp Salsa was being served up by a string of workers who kept the food coming. People didn’t have to wait long because Shirley was moving the plates out as she invited visitors in to come and try their food.
http://www.johnandshirleyscatering.com 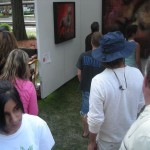 Every Piece of Artwork Has a Story to Be Told: Tell it to Everyone
Tony Savoie
Tony’s work caught my attention because the artwork was bright with various reds and the images had depth and layers with unusual imagery. When I walked into his booth 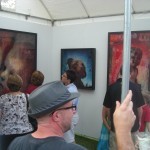 , he greeted me. When I asked how he created the paintings and mixed media he told me the story behind each one. He said he created the framed pieces, two that featured pit bulls, another that was of a baby wearing over-sized boxing gloves, because they were strong, striking images. The baby with boxing gloves was inspired by a 1930s ad that he’d seen and liked. The pit bull was a powerful, iconic visuals.

Tony explained the chemical process that made the paint stick to the glass. It was memorable because Tony was there to talk about what he created, how he did it and why it mattered to his his artistic vision and work.
http://www.tonysavoie.com 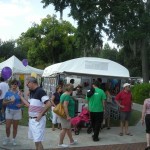 Location Is Everything:
Mike Bacon, Photography
Mike Bacon had a location at the corners of Park and New England. It was the first one at the top of the park. But more than location, Mike used every inch of his booth and display area to show his work. Inside, outside he positioned pictures so that you couldn’t help but stop and look. The colors were bright, colorful, accentuated natural images that pulled you in.

There was a shot of a tiger bounding in the ocean surf. Stallions rearing up and fighting in a three-shot layout. He had boxes filled with a variety of underwater ocean pictures he’ 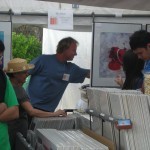 d taken, with little bits of information that explained what parts of the world the photos were taken in.

Most important was that Mike spoke with his visitors. He was telling his story, how he took the pictures, where he took the pictures, why he went where he did and how he got there. The voyages to the various parts of the world were a part of the experience he was sharing. And he used his booth engage the audience in his life’s work.
http://www.mikebacon.com 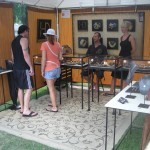 Stepping Into an Event Experience:
Christiane Hampel Jewelry
Christiane took the show on the road and transformed the same booth style given to all event participants and created a jewelry store experience. The wall colors matched carpets laid on the grass so that it felt like a jewelry store in the middle of the park. Both artists came in when I walked up to look at their designs and politely said hello and asked if I wanted to see anything. They used quality cases that matched the chic and clean interior and catered to guests with quiet and patient attention as they looked at the jewelry. It was welcoming and comfortable.
http://www.hampeldesign.com

Attention-Grabbing From Across the Street:
Current Fashion Store
Current is a men’s contemporary fashion store on Park Avenue. Lights flashed inside the store Club music could be heard from across the street from the park art festival and the combination said that something was going on inside. Great way to capitalize on an existing event. It was attention-grabbing and the store was busy.
http://www.currentmen.com